7 & 8 months in one post! Because these two months have been nutso! Libby is over 20lbs now, and probably almost 30in long. She looks like an 18mo old. Except for the lack of hair – that makes her still look like an infant 🙂

The last couple months were jam-packed with firsts. Libby’s world is expanding fast!

I stubbornly refused to travel with the baby all winter long (who wants to risk being out in white knuckle winter mix with a brand-new baby?), so I knew we would be in for some road-tripping this spring.

Our little traveler all set for the journey!

First, we went to Baton Rouge, LA to meet Great Granddaddy HB! Libby was a great road-tripper, sleeping most of the time & rarely fussy. We even spent the night in a couple of hotels. The whole ordeal did mess up our sleeping schedule a little & while we still went to bed consistently at 8-9ish each night, we did not sleep through the night much while out of town, usually popping up at least once to be reassured.

We had fun with Great Granddaddy HB!

We got to meet Wilton too 🙂

Wait, so I get rice cereal & you get LA seafood?!?

Then a month later, we went to Omaha, NE to see Grandma Karen and meet Great Grandma Olive! We also stopped to visit with Great Grandmother Claire in Kentucky, then Aunt Jen, Uncle Dave & cousins Megan & Grant in St. Louis, and finally cousins Marie, Pat & second cousins Elliot & Olive in Kansas City. It was quite a trip! Libby saw & met for the first time so many people. In Omaha, not only did she see her grandmothers, but also her great aunts & uncles & cousins & second cousins… plus even met a couple of her daddy’s high school buddies & their kids. A lot of excitement! Pretty much the same drill as Baton Rouge – did not sleep through the night or nap very well while out of town, but a very good sleeper in the car.

Super-expert at this Cracker Barrel high-chair thing – what what!

Second cousin Olive showing Libby how to play with her toy

We stayed with Grandma Karen 🙂

While in Baton Rouge, Libby decided she’d had enough of this lying around on her back business and made the roll-over happen. In fact, I missed the first time – I was in the bathroom! I heard her pipe up & did my usual calling out of “It’s okay, mommy’s just in the bathroom, I’ll be right back” routine, thinking she was just scared because I went out of sight, but when I got back, she was on her belly & not too happy about the impromptu tummy time! After picking her up & assuring her she was okay, I did what any parent would do – plopped her back on the floor & tried to get her to do it again so I could film it! (I’ll have to add the video to the post later, I’m already a month behind posting I don’t want to delay it more)

At first she was just going from her back to her belly & getting stuck, but soon enough she figured out the getting back over part. We keep bracing ourselves for crawling, but she hasn’t quite figured it out yet. Lots of scooting & rolling & frustrated baby pushups. As far as I’m concerned, she can take her sweet time. Mobility kind of terrifies me, mostly because our house is far from baby-proofed yet.

Contemplating a slice of avocado

We finally started eating veggies & fruits starting in March! Libby eats pretty much anything we put in front of her without much hesitation, although the green beans got some funny facial expressions (of which we failed to take pictures of! Oh well) & were clearly her least favorite thing so far. 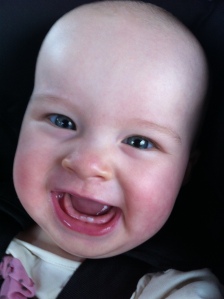 Teething is crazy. She gets so fussy and just gnaws. I went and bought more teethers, the kind you can put in the fridge, because that seems to calm her down. She often likes to alternate what she’s chewing on & will hold a teether in each hand. In fact, even if it’s not a teether, she just likes something in each hand in general. She is a grabby grabby mcgrabster – nothing she’s strong enough to manipulate is safe from her little paws.

In my last month of pregnancy, I went to a walk-in nail salon to get my toes done, and was chatting with the woman next to me about how two of my best friends were pregnant at the same time as me & how fun it would be to have the babies play together. Her response? “Just because you guys are friends does not mean your children will like each other.” Boooo weird nail salon lady. Boooo.

In an effort to prove weird salon lady wrong, when Emilia flew into town all the way from California to visit her grandparents, we set up time for Libby & Emilia to get to meet for the first time. Emilia’s mommy, Sarah, & I have known each other since kindergarten, and we ended up with baby girls born just one month apart! So excited to be sharing this motherhood journey with her 🙂 The first of many playdates, hopefully Emilia & Libby with be good buddies!!

First Trip to the Zoo

The wife of a high school theatre buddy of mine, Cassandra, invited me along to the zoo on her guest pass. She has a baby girl just a month older than Libby named Everly. Being pretty much the first beautiful day in Nashville of 2015, the zoo was, well, a zoo. I had not been to Grassmere since it was just Grassmere, and so being the clueless first time mom that I am, I was utterly unprepared for the chaos. I forgot the sunscreen, I forgot my lunch, I forgot the sunhat, I left the parking ticket in the car & didn’t get it stamped like I was supposed to… So obviously, with that many forgots, I cussed within five minutes of arriving. Literally every mom in earshot looked at me as if to say “if it was socially acceptable, we’d all burn you at a stake right now.” But fair enough, I need to become more conscience of my language before Libby gains the language skills to parrot everything I say. Luckily Cassandra did not write me off for my potty mouth. She is a zoo expert, so she did all the navigating around the park, lent me sunscreen, found an infant sunhat in the gift shop, and generally helped me to not have the anxiety attack I’m convinced would have gone down had I tried to brave the zoo all alone. Now that I’ve done it once, I feel like the zoo will be a good future outing. I will be sooo much more prepared.

New friends hanging out in the grass after touring the zoo

We’ve finally given up the car-seat stroller rides, and Libby gets to ride facing the world. She gets to see a lot more that way & seems to like it. In Baton Rouge, we also got to ride in a little umbrella stroller that Mimi bought for us.

First Bathtime Since October Without Screaming

Good thing too, because with the messy solid foods & going outside more in the pretty weather, she needs more baths than she used to.

Of course, since bathtime is now easy-peasy, clearly that left an opening for something else to become a challenge….  I mentioned in the previous post that the changing table was a whole new ballgame. Well, I had no idea what was coming. She doesn’t stay still, she rolls & squirms & grabs the diaper/rash cream/wipe box/literally anything she can get a hold of and protests when you flip her back over to get the diaper on. We’ve had to abandon our changing station on top of the dresser because she rolls over so quick & we’re afraid she’ll fall off. Strangely, she only does this at home. Change her in a Koala Kare station – total angel. Which is better than the vice-versa option I suppose.

While in Omaha, Libby had her first pro photoshoot! 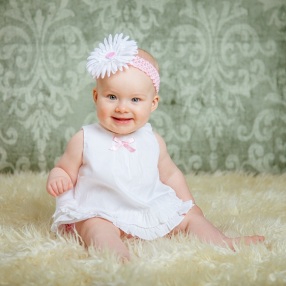 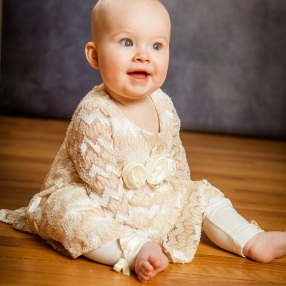 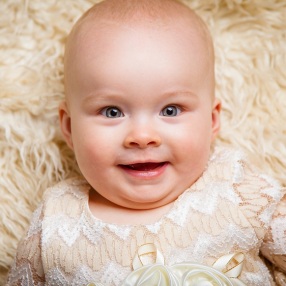 I was relieved she was so cute & co-operative. Because you never really know how kids are going to react to getting posed & having a camera pointed at them by a stranger. It’s a pretty strange thing to ask of a new human. Sara Rogers in Omaha was our photographer extraordinaire 🙂 She was really great, knew just what to do to get Libby to smile or turn. Excited to finally have some pictures of Libby that weren’t taken with an iPhone!!

These last two months were really nutso crazy as I said. It took the contractors waaay too long to fix the broken water pipe damage, so we were living in Brentwood with my parents for the entire month of March. Plus, in addition to going to Baton Rouge & Omaha with Libby & me, Brian also went to Cleveland twice for work, ran a trail race in Atlanta, went to a leadership training event in Washington DC, and attended a bicycle summit in Knoxville. Plus his company moved offices, so he had to pack up his office. So all that Daddy-out-of-town time means all Mommy all the time. Mommy & Daddy are a little tired & have barely gotten to see each other. So I’m sorry if I’ve neglected friendships (per usual) or messed up returning a call, or overlooked an email, or generally sucked at being responsive. I can barely keep my kitchen at an acceptable level of clean and I’m at least five loads of laundry behind in keeping clean clothes on my back. I have, however, hired a housekeeper (did I tell you this already?) who comes every other week for two or three hours, so I’m super excited for that to get really rolling (she’s only come four times since January because of the whole contractors fixing our house thing).

Although I’m tired & Libby’s new-found deep curiosity & opinions on everything in her world are challenging to keep up with (“no you cannot have Mommy’s dinner plate, let go please”), it is also really exciting to watch her experience all these new things. Watching a tiny human become more human is pretty adorable 🙂

2 thoughts on “A Whole New World”